This album is compiled from a collection of recordings made between May 2011 and March 2013. All the recordings began life as long format improvisations (generally 30 minutes or more in length) supporting our yoga classes and workshops. From these countless hours of recordings we have gleaned a few pieces that we lovingly edited into this album.

When we began this journey I was extremely insecure about my voice. I do not think of myself as a singer; however during this journey I began to be exposed to the power of chant and mantra. I was exposed to this tradition of chant through a few concerts and classes I attended (particularly a concert by Dave Stringer and classes with Kirantana Khalsa) and then later Anne and I began to chant together at home. Chanting the mystical sounds of the yogic traditions in a group setting was revelatory for me. I was able to separate myself from the meaning of the words and to sing simple melodies without feeling self-conscious! Not only that but I began to truly feel a spiritual connection throughout my entire self. I was and am quite literally “enchanted” by this practice.

Over the years I hesitantly started to incorporate chanting into musical improvisations for yoga classes. I found that by looping my voice I was able to create a choir of one and from there the flood gates opened. I began to improvise my own versions of the chants that I was most drawn to and that Anne specifically requested for class. This album of recordings is drawn almost exclusively from these chant based explorations from the Kundalini Yoga tradition.

After classes, I am often asked to explain the instruments and technology of this music by people that are amazed by the landscape of sounds they just experienced. I play many different instruments and constantly experiment with the ways in which they can support one another. The instrumentation and country of origin for these recordings is: Bird Calls from Brazil, Cajón from Brazil, Harmonium from India, Kalimba from South Africa, Noah Bells from Tibet, Ocean Drum from Nepal, Egg Shakers from Latin America, Bells and Bowls from Tibet, Tuba from Germany, and Wooden Frog from Cambodia. The Mississippi Bass Harp is also used. It is an instrument that I made based on the Doson’goni from Mali. The rest of the sounds you will hear throughout were created using my body – breathing, vocal percussion, body percussion, and of course sung vocals. All these different sounds are layered through a pair of loopers made by Electo-Harmonix, the 16-Second Digital Delay and the 2880 Super Multi-Track Looper. By using these two pieces of gear I am able to layer sounds together to create the musical landscapes represented here.

Finally, there are generally strong elements of blues, jazz, and funk in the music I create. If these elements seem at odds with spiritual chanting, what can I say? That's just the way we roll in Memphis!
PREV / NEXT   1 / 2
BACK TO UNCOILING (LIVE L... 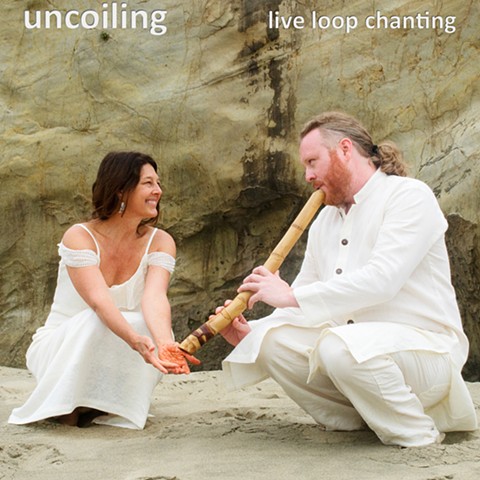