Soundly in Place (Review)
October 17th, 2013
Read the full article here including a short clip of music inside the building.

In 2011, local musician Sean Murphy lost Crosstown Arts' MemFeast competition to Robin Salant's animated colored-window project. Murphy was not upset. Immediately taken by the sound signature of such a huge, unfinished space, Murphy spent 18 months composing music for it. That music is the basis of a new album, Sketches of Crosstown, and a performance this Sunday, October 20th, from 4 to 6 p.m.

The space presents some challenges.

"The music was inspired by the actual building. Primarily what you hear are the seven or so seconds of echo. At first I thought I was going to compose music, put an ensemble together. But I quickly realized that that just doesn't work in a space like this, because every sound you make just rings and rings."

"We couldn't really do rhythmic stuff in this space," he says. "But we did [record] up in the tower where the 5,000-gallon metal tank is. The sprinkler system for the entire building was all gravity-fed from that tank. That's the reason that tower is there, to house the water tank. There's only a couple of seconds of echo in that room but with a cool flange effect because there's still water in the tank."

Murphy was classically trained on tuba at the University of Memphis, where he earned a degree in ethnomusicology, the study of musical cultures.

"One of my favorite pieces on the album is called 'Crosstown Soul.' It's me on tuba and Jim Spake playing tenor sax. Jim is as far in one direction as he can go, and I am as far in the other direction as I can go. So we're pushing two football fields away from one another, indoors, with a microphone sitting there in the middle. I'm outlining a chord progression. But I sound like an organ playing in the space, because I would play three notes and they would all ring together and grow. Then Jim comes sailing over the top of it. It really was just beautiful."

The album is available on vinyl and is acoustically marvelous. It takes a second to get over the noise floor — ambient noise (cars, wind, etc.) — but the reward is music that sounds like a place. It's a reminder that music was once recorded in huge spaces like former churches, such as Columbia's 30th Street Studio in New York. A note is played and grows in the space as it reverberates off of the walls.

On Sunday, Crosstown Arts will host a performance by Murphy in the Sears building, with pieces on different floors and culminating on the roof for sunset. Basic admission gets you in, but the pricier tickets include the record, which is worth the 11-story climb and the cash. (Turn off your cell phone, as your bad manners will reverberate for seven full seconds.)

Murphy has other large-scale goings-on. We met under his largest undertaking, the new chimes in Overton Square's bell tower. {Note: More info about the OS Wind Chimes may be found at beingart.com}

Murphy and his wife, artist Anne J. Froning, own Being Art, specializing in outdoor classrooms and public-art instruments. They made the instruments in the Memphis Botanic Garden's My Big Back Yard. Their first job was a 35-foot-long marimba in Nebraska City, Nebraska.

"Loeb Properties wanted to do something with the tower to have an art element. Anne and I both looked at it and went, 'Wind chimes.' They thought it was a great idea and went for it. It's the biggest thing we've ever done. That whole thing weighs about 750 pounds. The chimes are aluminum, about seven inches in diameter. The longest pipe is 10 feet and is a low A."

Froning designed the sail, which was cut by a friend of theirs who designs armored cars.

Murphy is still aghast at how well their work has fit into this public space at the often-awkward nexus of art and commerce. He thinks the Loeb brothers have a unique take on real estate. 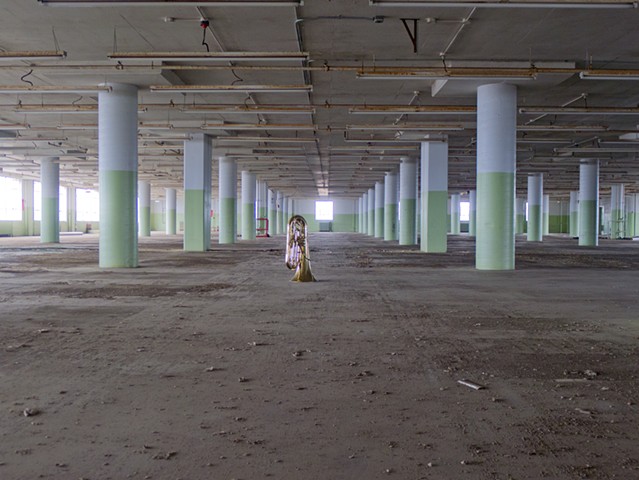